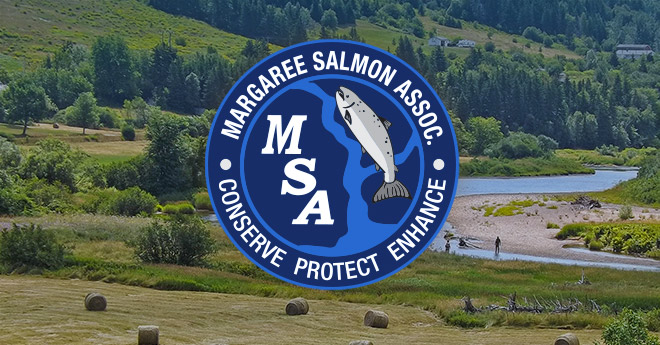 Fall in the Margaree Valley is a busy time for the Margaree Salmon Association. Not only did we hold our annual general meeting on Oct. 7th but we restarted the annual dinner auction on Oct. 8th and the Celtic-Colours Learn to Fly-fish event on Oct. 12th, both stopped by COVID the last couple of years.  As well, for the first time in over a month, the Margaree river had good amounts of cold water in it, so many of us were squeezing in time on the river when we could.

The entire Draft  minutes of our 2022 AGM will shortly be uploaded to our margareesalmon.ca website, however here are some highlights.

The AGM began with a review of our summer activities by President Bill Haley who highlighted rock work we’ve completed downstream from Doyles bridge, the record number of PhDs conducting research on the river, and our continued tree-planting and stream restoration in the tributaries by our stream crew. Our one and only resolution, to ban the use of sinking lines, was on the docket. After a discussion and the realization that we had to do more research to define what a sinking line is, (does it include all sinking lines, leaders, tippets, and what about split-shot?), the decision was made to table the resolution for further discussion so we can return with a better understanding of all variables.

The nominating committee put forward three names of persons for MSA board positions:

Gioia Usher has accepted a position as a Director of the association;

After completing two terms as President, Bill Haley will now remain on the executive as a past President, ensuring a smooth transition over the next year.

Alongside these new board positions Bill also introduced Aaron Allen, a new coordinator for the MSA who started in July.

Our guest speaker, Pat Wall, a founding member of the MSA shared how his lifelong love of salmon angling evolved into giving back by volunteering with several organizations including the Nova Scotia Salmon Association, Wild Salmon Unlimited and of course the Margaree Salmon Association.  Pat fell in love with his wife Annie from Margaree and still beams when he talks about the people he has met volunteering their time to make the Margaree what it is today. Pat reminds us that there have been many obstacles over the years such as poaching, commercial fishing, and plenty of controversy.  It all began with like-minded individuals who wanted to ensure preservation of salmon on one of his favorite rivers, the Margaree.

As noted before, after a two year hiatus due to a global pandemic our annual dinner and auction, our only fundraiser of the year, was a success.  With a near sell-out crowd and many generous donations from the local  Margaree and fly fishing communities, over $5,000 was raised to be put towards our projects on the Margaree river.  The NE Margaree Fire Department tended the bar keeping everyone’s thirst quenched, while St. Patrick's Catholic Women’s League continued their tradition of providing their first class fabulous turkey dinner. Many happy anglers went home with freshly tied flies, beautiful works of art, rods and reels, and cards towards a few rounds of golf.

I attended this event for the first time in 2019 and it first solidified my love of not only the obvious beauty throughout the Margaree valley but of the wonderful people who are part of Margaree and support the Margaree Salmon Association. Three years later, having now moved to Margaree it was great to see so many friendly faces come out of the woodwork after having missed the last two years. We will look forward to this event every year.

By the way, another fundraiser COVID stopped was also started again at the Dinner Auction–tickets on a new fly rod.  If you are looking for tickets, please contact [email protected]